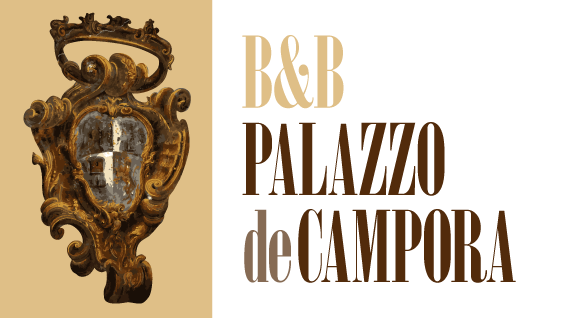 ‘Palazzo de Campora B & B’ is located in Via dei Tribunali, one of the oldest streets of Naples, dating back to the 4th/5th century B.C.

This street is part of the ‘decumani’, built by the ancient Greeks when they established the new city of ‘Nea polis’ (the ‘old’ city was known as ‘Palaepolis’ and was located on the hill of Pizzofalcone). ‘Nea polis’ became ‘Neapolis’, which over time transformed into the name we all now know, ‘Naples’. The area of the ‘decumani’ is a fascinating treasure trove and, in fact, in 1995 the historic centre of Naples became a UNESCO World Heritage site.

Naples: city of art and culture
The various historical layers of the city are still visible in the urban fabric, from the early Greco-Roman era to the Golden Age of the Angevin dynasty. Naples has always been a city of art and the work of great artists is to be found all over the city. Take the time to walk around and admire works by revered artists, including Giotto, Pietro Cavallino and Tino di Camaino, Renaissance artists Benedetto and Giuliano da Maiano, Donatello, Michelozzo and other significant Tuscan artists. Admire masterpieces from the 17th century / 18th century period of Neapolitan Baroque. The Neapolitan school of painting is undoubtedly one of the most important painting schools of all time; it includes artists such as Caravaggio, together with Luca Giordano, Andrea Vaccaro, Mattia Preti, Massimo Stanzione and Francesco Solimena.

Opposite our B & B, Palazzo Ricca houses the Historical Archives Museum of the ‘Banco di Napoli’; with documents stored in over 300 rooms, this is “the largest archival collection of bank documents in the entire world” (see website for more details).
Nearby, Capuano Castle is the oldest medieval castle of Naples and is For centuries it was the Hall of Justice, also known as the ‘Vicaria’, and is soon due to open as a museum dedicated to “la cultura dellà legalità” (“the culture of legality”).
Also a stone’s throw away from the B & B is the beautiful 16th century ‘Santa Maria della Pace’ church (this monumental complex was also home to the ‘Hospital of the Priests of St. John of God’) with its breathtaking ‘Sala del Lazzaretto’ (a room where people with infectious illnesses, such as leprosy, were taken care of).
In nearby Piazzetta Riario Sforza, you can admire one of the most noted spires of the city: the Spire of San Gennaro (St. Januarius), a votive spire dedicated to the patron saint of Naples, which stands atop a marble column in the middle of the square. From this square you can also go into the ‘Duomo’, the Cathedral of Naples, one of the most important sites of the city (although this is not the main entrance). Nearby, the Museum of ‘Pio Monte della Misericordia’ houses a picture gallery which includes one of Caravaggio’s famous paintings: ‘Le Sette Opere della Misericordia’ (‘The Seven Works of Mercy’)
In Via Duomo, there are several museums including the ‘Museum of the Treasure of San Gennaro’, well known for its priceless collection and generally considered to be one of the most valuable collections of jewels in the world.
There are countless churches, chapels and cloisters to be explored in the ‘decumani’ area of the city, as well as over 200 historic buildings.